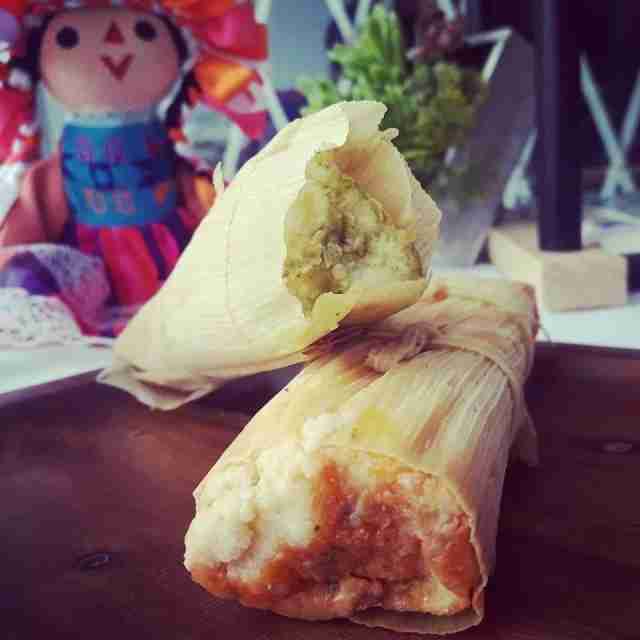 “It was a tough situation,” says Erika Araujo, founder and the chef behind the Mexican Collective Store “Because we came to Canada as refugees, we had to leave everything — my family was homesick, and it was difficult for us to adapt.”

When Araujo first arrived in Toronto 12 years ago, she began an academic bridging program to become a personal support worker and to continue her career in healthcare. Her husband, who had also worked as a nurse in Mexico, enrolled in an interior architecture program and encouraged her to “take a chance, and try something new.”

Araujo first began cooking as a way to bring Mexican flavours to her family. “I remembered the feeling when my mom used to cook something special on a Sunday and how that really lifted my spirits. So, I put my hands to work and I started to cook very simple recipes and progressed to more complicated ones. I found it very interesting how food has a strong connection with your mind.”

After falling in love with cooking, Araujo decided to embark on a new career and joined the culinary program at Humber College.

As part of her education, Araujo took part in the Newcomer Entrepreneurship Hub, a free entrepreneurial and training program partnership with Ryerson’s University’s Diversity Institute, and funded by Immigration, Refugees and Citizenship Canada, at the Scadding Court Community Centre. Through this program, she received mentorship from local entrepreneurs and business experts, attended workshops, and met other small business owners. “It was inspiring to see how we all had the same goal of making our dreams come true,” says Araujo.

“She wanted something to develop something that was budget-friendly,” recalls Ayaa Mohamad, “she was the first to make connections in the class, listen to feedback from the instructors and make the shift.”

She launched her first business, Ixiim Gallery, an art gallery, cafe and catering business in Etobicoke. “I’ve had a really good experience opening businesses in Toronto: there are a lot of resources in the city that you can use” says Araujo. “The Business Improvement Association in the area was very supportive of having a Mexican business in the neighbourhood, and those associations help to encourage involvement in the community.”

After operating the gallery and cafe space for a year and a half, Araujo closed the store when city construction plans were announced that would affect traffic into the store. The connections she had made through Newcomer Entrepreneurship Hub gave Araujo the tools to pivot her business into its next chapter, starting the Mexican Collective Store in early 2020.

What makes Araujo stand out and succeed as an entrepreneur is her collaborative approach to business, says Ayaa Mohamad, manager of community engagement and development at the Scadding Court Community Centre. “I really admired the way she connected with fellow participants and made connections all across Toronto,” says Mohamad. “She takes every opportunity to network, make meaningful connections and support other entrepreneurs — and she goes about it in such a genuine way.”

Before the pandemic, working with The Depanneur, Araujo gave lessons on Mexican culinary traditions in Dufferin Grove Park. Araujo’s food represents more than just her family and her culture — she sees it as a form of storytelling. “I feel there is no better way to fall in love with other cultures than trying the delicious food and knowing the cultural connection of a specific dish, region or tradition involved in it,” she says.

Following her dreams hasn’t always been easy. “For me, having to build a business with minimum capital has been difficult,” says Araujo. “During the pandemic, there were many cancellations and sales have been lower compared to previous years.” But those challenges spurred another pivot in her culinary path. During the first lockdown in March 2020, Araujo used her connection with Mexican and Latino leaders to help to work collectively to purchase supplies to deliver salsas and other treats to her clients’ curbside.

“She wanted something to develop something that was budget-friendly,” recalls Mohamad, “she was the first to make connections in the class, listen to feedback from the instructors and make the shift.”

Moving the Mexican Collective Store online has allowed her to create a space where her clients can order a range of items, including frozen tamales and Mexican food kits, for delivery. Inside the kit are high-quality Mexican cheeses, chillies, canned goods and produce with weekly boxes for the best value and variety.

Currently, Araujo and the Mexican Collective Store can be found at local Farmers Markets, including the Junction Farmers Market every Saturday, and at Montgomery’s Inn Farmers Market biweekly on Wednesdays, where she sells an assortment of tamales, tlacoyos and other Mexican dishes. “I love that people are going to the farmer’s market right now,” says Araujo, “it’s great that people have become more conscious about buying direct.”

The culinary journey for Araujo and the Mexican Collective Store is just getting started. Araujo has just bought a trailer, which she plans to renovate to create a mobile feast for weddings and other events.

“I never imagined I’d have a second career,” says Araujo. “To create my own opportunities as an immigrant woman makes me so happy because now I can share with my experiences with other entrepreneurs. I felt I had a second chance in life and I took it.”